Silhouette cutting reached its pinnacle in early 19th century Europe and America, when itinerant artists faithfully captured their subject's appearances and even personalities with only the use of paper and scissors. This fascinating article traces the history of silhouette cutting from ancient times and explains the reason for its popularity ~ and eventual decline ~ in early America. It also features interviews with four of the country's leading silhouette artists still practicing the art in a traditional fashion. 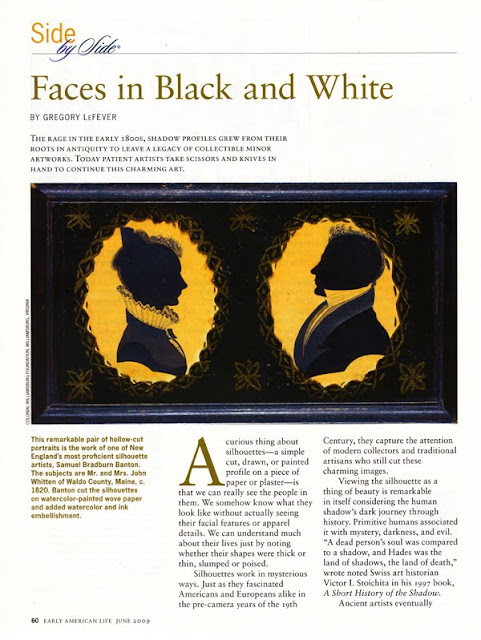 Posted by Gregory LeFever at 5:20 PM

Here are a number of articles I've written for Early American Life magazine. This blog is not affiliated with Early American Life or its publisher, Firelands Media Group. The articles appearing here are the property of Firelands Media Group.
To read the articles, just click on the link in each article's post. Several of these also are in the portfolio section of my writing-business website. You're welcome to browse the site.
Feel free to leave comments related to the articles. You can also click on my photo below to visit my profile where there's a personal email link. 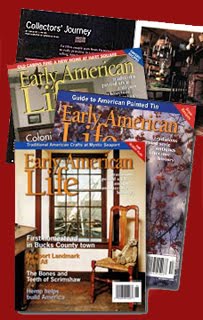 Early American Life is the nation's leading magazine on early American style, decorating and traditions. It takes you on visually exciting journeys to beautiful homes -- both vintage and reproductions -- and to many of the country's leading museums and landmarks. In its pages you can explore early American lore and learn about the period's most interesting antiques.
Since 1970, the magazine has attracted an extraordinarily loyal audience of readers. Even in this fast-paced age of shortened attention spans, Early American Life's readership continues to grow as the appeal of the colonial period is discovered by an upcoming generation of devoted readers.
I've been honored for the past eight years to be one of Early American Life's contributing editors, a position that's enabled me to explore this fascinating period, one that's enthralled me since childhood.
Early American Life is published by Firelands Media Group in Chagrin Falls, Ohio, a group of bright, creative and hard-working people dedicated to America's heritage.
Click here for Early American Life subscription information. It's well worth it!

A useful feature of Early American Life magazine is its annual Directory of Traditional American Crafts. It's a listing of more than a hundred talented artisans whose work is juried by experts in early American crafts such as furniture, artwork, metal working, pottery and textiles, among many others. Jurors are usually curators from America's leading museums.
I've interviewed a number of these skilled artisans for the Side-by-Side articles in Early American Life, with their individual stories attaining high readership.

Click on photo for my profile and an email link.

You might be interested in my other blogs. Quantum Spirit covers random topics from metaphysics to physics and some spiritual matters. Ancient Tides follows fascinating findings in archaeology, human development through millennia, plus thoughts on ancient civilizations.